It was a good day for a walk

I’ve taken up going for walks on a (somewhat) regular basis. Partially, it’s because I need the exercise but, mostly, it’s because walking is about all my recovering shoulder can handle. Even then, the pendulum motion of my arm starts my shoulder to aching after a while.

Today was a good day for a walk. It had been quite a while since I’ve gotten out on a (possibly) regular basis and, I’ll admit, I had forgotten what Fall smelled like.

Sometimes, I’m walking purely for the exercise, other times, I’m walking to let my subconscious chip away at a story or some other stuff. Sometimes, like today, I’ll bring the camera along in the hopes of getting a picture of one of the hawks that lives around here.

Fortunately, I’ve got a nice, quiet stretch of road that I can use. This is what it looks like: 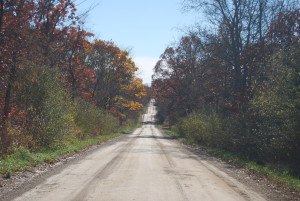 This time out, I came back with about 40 pictures. Of those 40, the pictures of the road are my favorite. I love pictures of empty roads. The lock screen on my phone is one and I’ve got pictures stashed here and there of more of them. The less traveled the road, the better, although I’ll be the first to admit that a lonely two lane blacktop under a full moon has a lot of appeal.

They speak to me on a level that I can’t fully articulate. Part of me thinks that they remind me of “The Journey” (you know, the one that’s more important than the destination) and this might be true.   I don’t know if this has had an influence on my decision to be a writer (because we’re all about “The Journey”) or if it’s an outgrowth of that decision. Either way, it gets me standing in the middle of the street, aiming the camera at…what?

There’s another part of me that sees those pictures and thinks, “What’s over that last hill? What’s just beyond the curve? What’s beyond that?”

There is a part of me that looks at those scenes and thinks of the potential beyond what the camera captured. This is the same part that would happily stand out under a clear night sky for hours (if I could get away with that…my neck would kill me) and just imagine what’s out there.

This is the part of me that will pause while walking down the office supply aisle and look at pens…and paper. Talk about potential? Anything could be in that tightly wrapped bundle of 500 beautifully pristine pages.

So if you run into me one day (and I’m speaking figuratively here, please watch out for the idiot in the middle of the road with a camera) and you ask me where I get my ideas from…

I still won’t be able to tell you.

But I can point you in the right direction.  It’s beyond that curve, up the road a-ways.