Playing Through the Pain

A couple of weeks ago, I came back from the Doctor’s office to report that I had a strained hamstring in my left leg.  I don’t know how I did it. It came on gradually…well as gradually as something like this can sneak up on you.

For those of you that have never had one, it’s a little like this: 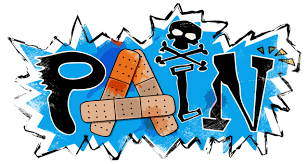 Standing, sitting, in some cases laying down…pretty much every scenario where your leg being attached to the rest of you is an option.

I’ve been staying off my leg for as much as I can and it’s improving, but it got me to thinking about the times when it hurts.

First, my thoughts about about playing through the pain: Don’t.

Just don’t. That shit is happening for a reason.  Pay attention to it. Get it taken care of.

Now, aside from the immediate, “Ow, WTF??” jobs that pain has, one of pain’s long-term roles is that of a teacher.

Pain lets you know where your limitations are. At the moment, mine included stairs, slipping on ice, and kickboxing

Ok, maybe I decided not to go anywhere near kickboxing long before this.

Stairs were a particular problem because, of course, my writing room is at the top of a flight of stairs.  And, of course, I struggled with those stairs for a good week and a half (or more–what can I say–sometimes I’m an idiot.) before discovering the lesson that pain had for me:

“You can write someplace else…You knob.”

I gave up and moved my “Writing Room” downstairs.

I use the quotes, because I only moved my laptop and a few essentials, but the experience has been, you guessed it, educational.

First, let me say that I have a hard time writing in the middle of usual household activity.  There are some folks that can write just fine on the couch, in the living room, with the television on, and conversation happening all around them.  I will never be one of those folks.

I need my space. I’m alone even as I’m typing the bulk of this post out. Before, I had a door that I could close and, realistically, expect it to stay closed.

Not anymore. Not until stairs and I are back on speaking terms.

So I needed a place to write.  I was already getting up early so that I can get my writing done.  The rest of the house is still asleep at 5 or 6 in the morning regardless of whether or not I’m upstairs. So I’m covered there.

Additionally, I use music as another layer of insulation between me and the rest of the world. When I’m in the zone, I hear the music, but entire songs, whole stretches of playlist go by without me noticing.

But what happens when things aren’t “Just so”?

I think that, as a writer, it’s easy to get caught up into a specific way of doing things and that can get in the way of you getting words on the page: The desk isn’t arranged just right, it’s too hot, too cold, too Monday morning at 5 am, etc.

Those are all things that my inner heckler will glom onto me, one at a time, like leeches, sucking away my desire to get my work done.

But despite “The Entire World” being off kilter, I did manage to get work done in the new setting.

That’s what I’ve learned from this:

Provided I’ve got a few essentials, I can write in other places. I can be flexible. Don’t get me wrong, I’m not giving up my writing space. It’s mine and the act of closing that door behind me is a definite thing–a choice.

But now I know that it’s not my only choice.