Today I get to host one of the stops on Jennifer Estep’s Unraveled Blog Tour!

How cool is that!!

First, there’s a quick Q & A Session and, below that, I’ve got an excerpt from Unraveled. Be sure to check that out.

To top off all that Awesome, be sure to make it all the way down to the bottom of the page for a cool Giveaway!!

So, without further ado, here is my conversation with Jennifer Estep. 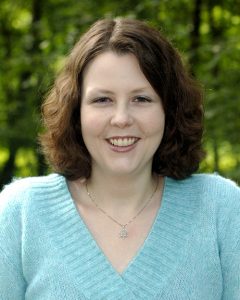 Me: What was your favorite part about writing this book?
JE: I’ve always loved western books, movies, and TV shows, and I had always wanted to write a western myself. In Unraveled, Gin and her friends go to an Old West theme park for a weekend getaway, and Gin ends up battling some evil cowboys, among other villains. So Unraveled is sort of my take on a western – Spider-style.
Me: Some authors use music or colors, etc as they are writing, or for specific characters. Did you do that for Unraveled?
JE: I don’t usually listen to music when I write or use it to describe characters. I will sometimes associate a color with a character and have that character wear a specific color a lot.
In Unraveled, I thought it would be fun to do a different spin on colors and cowboy hats. In many westerns, the good guy wears a white hat, while the villain wears a black hat. But in Unraveled, I have one of the villains wearing a white hat throughout the book, along with a silver sheriff’s star. 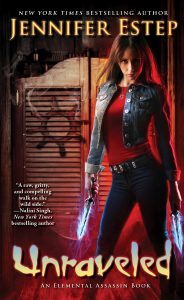 Me: Do you have/maintain your own series bible and how much would it weigh if you printed it out?
JE: I do not have a series bible for my Elemental Assassin series. I’ve tried a couple of times to do one, but I found that I was spending more time on that than I was on writing the next book in the series. So whenever I have a question about something, I just look it up in the books.
Unraveled is book #15 in the series, so at this point, I imagine that if I did have a series bible, it would probably weigh more than 20 pounds printed out. LOL.
Me: What does your average writing day look like?
JE: I’m usually on the computer by 8:30 or 9 a.m. checking email, doing social media, answering comments, etc. After that, I tackle whatever I need to work on that day, whether it’s writing a new draft, doing copyedits, reading through page proofs, etc.
I take a break for lunch, then go back to work. I take another break in the afternoon to eat dinner, etc. I usually get back on the computer and do some more work in the evenings. Depending on my deadlines, I might work until 9 or even 10 p.m.
Me: Every writer comes out the end of a book different than when they went in. How do you think you’ve grown/improved over the course of creating Unravelled?
JE: I had so much fun writing Unraveled. Like I said before, I had always wanted to write a western, so I can cross that off my list of books that I want to write.
Happy reading, everyone!

We both settled back in our seats, watching the mansion and sipping our hot chocolate.

The folks who’d been hosting the dinner party must have decided to go to bed, since the recorded carols abruptly cut off, and the holiday lights winked out one door, window, and plastic snowman at a time, further blackening the landscape. The drizzle picked up as well, turning into more of a steady rain, each drop tinking against the van windshield. It truly was a night fit for neither man nor beast, but these had been my favorite kinds of environments as an assassin. The cold, the rain, the darkness always made it that much easier to get close to your target and then get away after you’d put him down. If I wanted someone dead, I would have waited for a night just like this one to strike.

And I was willing to bet that someone might have the same idea about the man in the mansion.

Phillip tipped his cup at the shadow still pacing back and forth behind the patio doors. “You really think that he knows something about the Circle?”

I shrugged. “He’s the best lead I have right now—and the only person still alive who might know anything about them.”

What could go wrong when you’re trying to unravel a decades-old conspiracy?

As the current queen of the Ashland underworld, you would think that I, Gin Blanco, would know all about some secret society controlling things from behind the scenes. I might be the Spider, the city’s most fearsome assassin, but all my Ice and Stone elemental magic hasn’t done me a lick of good in learning more about “the Circle”. Despite my continued investigations, the trail’s gone as cold as the coming winter.

So when Finnegan Lane, my foster brother, gets word of a surprising inheritance, we figure why not skip town for someplace less dangerous for a few days? That place: Bullet Pointe, a fancy hotel resort complex plus Old West theme park that Finn now owns lock, stock, and barrel. At first, all the struttin’ cowboys and sassy saloon girls are just hokey fun. But add in some shady coincidences and Circle assassins lurking all around, and vacationing becomes wilder—and deadlier—than any of us expected.

Good thing this assassin brought plenty of knives to the gunfight…

Jennifer Estep is a New York Times, USA Today, and international bestselling author prowling the streets of her imagination in search of her next fantasy idea.

Jennifer writes the Elemental Assassin urban fantasy series for Pocket Books. Unwanted, e-novella #14.5 in the series, is available now. Unraveled, book #15, will be released on Aug. 30.

There’s a tour-wide giveaway going on! Jennifer is giving away a $25 Amazon gift card, and the publisher has offered up 5 print copies of UNRAVELED AND one FULL SET of the Elemental Assassin series! Open to US and Canada residents only.

This entry was posted in Blog Tours, Writing and tagged Blog Tours. Bookmark the permalink.