I did it for a couple of reasons, not the least of which was that I thought having a blog would be kinda cool.**

I’d also heard that if you were doing any kind of creative thing you would eventually want people to pick up and consume like a certain border collie I know goes for cheese, that getting a blog up there and updating it regularly would be a pretty good use of your time***.

What I didn’t know at the time was the amount of work that would be involved. Now, don’t get me wrong, I am neither complaining, nor am I saying that this is the equivalent of a part-time job or anything like that.

But there is a certain amount of work involved. Updating the blog weekly, I would say, takes up somewhere in the neighborhood of an hour to two hours.

Now it might be argued that I’m responsible for shooting myself in the foot on that point because I tend to not plan posts in advance.

I’ve tried, and some attempts have turned out better than others, but the gist of it is that I kinda like flying by the seat of my pants most weeks.

Until no ideas come.

I’ll wake up on Sunday morning, make some coffee (so that I can tell what day it is) and realize that I’ve got a blog post to make and no idea what I’m going to say. 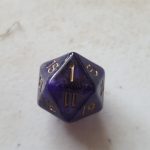 That’s me on some days.

I can honestly say that the idea of skipping a week has never come to mind.***** So what do I do when the coffee kicks in and I check my brain for ideas and I get…

(Yeah…that idea…I got nothing.)

The first thing I do is not stress out over it. That’s not to say that I don’t think that the blog is important. I wouldn’t be here every week if it wasn’t important to me. What I mean is that I’m accepting that I’ve got nothing…now.

But that can change.

The next thing I do is start kicking around ideas. This is a pretty rapid-fire generate and discard thing. Some of the first ideas that show up are things I’ve already talked about. Others just don’t stick, I’m not digging, or I discard for a number of other reasons.

Also, at this stage, I get rid of distractions. Since I’m usually the first one awake on a Sunday, I’ll get mornings of quiet which I love. Other days, one or more of the dogs will hear me knocking around the kitchen and let me know that a ninja, I aint.

Let me tell you, nothing will cause my brain to skip like a scratch on vinyl like a barking dog. So I let the dogs out and get settled.

Normally when I’m kicking around ideas, I’m doing other stuff. Making coffee, and the aforementioned knocking around the kitchen. Eventually something will stick.

Once I’ve got that something, I’ll start “reading” lines in my head ****** over and over and expanding on it.

It’s usually around this time that I’ll sit down, come up with a title (which the “kicking around of ideas” has mostly knocked out), start thinking about adding pictures, (staying off Twitter and Facebook), turn on the music (I have a hard time writing anything without music…which I use as another layer of insulation against distraction), and start typing.

For me, that’s usually all I need, that toe in the door will get me started.

The rest of it is an eldrich mix of improvisation and sheer bull-headed persistence.

That’s what works for me. What do Y’All do when the well runs dry?

*I wasn’t 100% sure about that year, but it seemed reasonable. After checking, I discovered that I had started the blog in 2015, but I wasn’t posting regularly until January 1st, 2016.

**Yeah. I still think that.

****When I can find it. Seriously, restricting access to streaming video based on where on the planet you happen to be, is a stupid idea.

*****I won’t claim to have a perfect posting record either, life happens, but I’ve never skipped because I didn’t feel like posting.

******This is difficult to explain. It’s like theres a line that I want to be sure to incorporate – something that sounds cool.  Often that line doesn’t look the same in the blog as it did in my head…if it makes it into the blog at all.