This week I have the pleasure to host Lucienne Diver on her blog tour to promote the release of her new book, Fangdemonium!

She was nice enough to stop by and answer a few questions from me and, after the Q&A, we’ve got an excerpt from her new book!

Don’t forget to scroll all the way down to the bottom of the page for an awesome giveaway.

ME: What did you enjoy the most about writing Fangdemonium?

LD: My very favorite thing was once again getting to write my humorously homicidal, endearingly dangerous psychic vampire Alistaire. I had no idea when I started the series how much I and my fans would come to love him. I thought he’d be a one-off character. My editor insisted that he had to make an encore. Without giving anything in the series away, stuff happens, and I’d left his fate a bit up in the air. Well, not anymore!

ME: How does it feel to be ending the series?

LD: I won’t say that my fanged fashionista heroine and her gang won’t make any repeat appearances in short fiction. (Gina’s a bit too persistent for that!) But it was really amazing to give the series a kind of closure. I really enjoyed bringing the series full circle. I really, really can’t wait to hear from readers and see what they think! 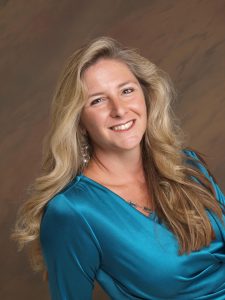 ME: Background music while writing, or quiet?

LD: I need quiet when I write. I love words, love lyrics. If I had music playing, I’d get distracted listening to the message rather than the voices in my head. Gina is a bit of a diva. She’d never stand for that!

ME: Without giving anything away, did the series end the way that you thought (or had planned) it would, while you were working on Vamped (Book 1)?

LD: You know, it kind of did. I’m a pantser. I start with an idea. I might know a few big events along the way and generally where I want things to end up, but I’m as surprised as anyone about how we actually get there. Often my characters will throw detours up in my path, so I think they’re going to zig and they insist on zagging. Writing is so much a test of mental agility. I know that technically we writers create our characters and chart their path, but more often it feels like we’re arguing over the map and fighting over who’s going to drive. As long as we agree on the destination, I guess we’re good.

ME: Every writer comes out of a book different from when they went in. How do you think you’ve grown or improved as a writer as you wrote Fangdemonium?

LD: I’m sure I did grow, but I can’t think of any specifics with Fangdemonium. I think that’s because I’m more overwhelmed by how much Gina has grown as a character from the beginning of the series to the end. I feel like a mama bear, in a way. I’m so proud of her and how far she’s come. I like the way she turned out. I think I raised her right…although she’d probably take all the credit herself! 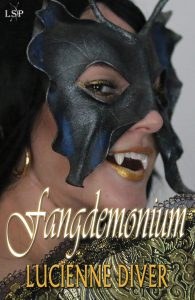 ME: If you could give one piece of advice to a new writer, what would it be?

LD: Get it down, and then get it right. A lot of first time writers are so self-conscious, trying to get things just right or to sound really deep or poetic. Sometimes authors have to get out of their own way and let the characters step up so their voices are the ones that flow onto the page. That’s why I write first thing in the morning. My inner editor is still asleep, and I don’t second guess myself to death. That’s for the revision stage.

Huge thanks to Lucienne for taking the time to field a few questions from me.

Now, as promised: An Excerpt from Fangdemonium!!

“I thought that was for the military.”

“So did I,” she said cryptically.

The new girl—I really was going to have to get her name—handed David something from a backpack before swinging it over her shoulder. Two somethings, actually. They looked like water balloons, only the liquid inside was cloudy.

But David wasn’t beside me anymore. He was standing at the sliding door to the panel van, which he’d never shut. He lobbed the first of the balloons with such force it exploded on impact, and the scent hit me like mustard gas. Not garlic and holy water like the grenade someone had launched back at the studio, but a bleach bomb, splattering the insides of the van. He moved to the driver’s side and did the same thing with the front section of the van. My eyes watered. Blood tears again. My nose stung.

“It won’t cover everything,” Imanyi said at our shocked looks, “but it’ll ruin the noses of any tracker dogs and it might do enough. We can’t leave anyone behind to do a controlled burn and we can’t let a blaze get out of control and set fire to the building.”

ABOUT FANGDEMONIUM:
Fanged and fabulous…and hunted.
Gina Covella, fashionista of the fanged, and her entourage are primed to reveal the existence of vampires on the popular Ghouligans television show, when their former federal handlers swoop in to shut them down and imprison the vamps in one of their super secret testing facilities. Or not so secret, as the gang knows all about the horror hospitals and has sworn to take them down.
Their daring escape runs them right into the arms of “the resistance”—a group of humans and vampires who’ve joined together to stop the fighting that’s made Gina and her boy Bobby’s hometown a bloody battlefield. Going home brings them back to old nemeses as well, including the psycho psychic who declared Gina “chaos” and Bobby “the key”. They hope he’ll unlock the secret of stopping the Feds’s freakshow experiments for good, because they’re building up to something big. Huge. And they’re consolidating their power in the Big Easy, aka New Orleans, where what’s cooking is nothing less than the final showdown.
Publisher: Lore Seekers Press
Price: $6.99
Release date: July 17th, 2017
ASIN: B073BMFDJ8

You can get Fangdemonium here

About LUCIENNE DIVER
Lucienne Diver is the author of Vamped young adult series (think Clueless meets Buffy) and the Latter-Day Olympians urban fantasy series from Samhain, which Long and Short Reviews called “a clever mix of Janet Evanovich and Rick Riordan”. Her short stories have appeared in the KICKING IT anthology edited by Faith Hunter and Kalayna Price (Roc Books), the STRIP-MAULED and FANGS FOR THE MAMMARIES anthologies edited by Esther Friesner (Baen Books) and her essay “Abuse” was published in DEAR BULLY: 70 Authors Tell Their Stories (HarperCollins). More information can be found on her website: www.luciennediver.com.
GIVEAWAY
There’s a tour-wide giveaway for copies of FANGDEMONIUM and a Rafflecopter gift certificate for 20 dollars! Open to US residents only.