For those of you that don’t know (and that would be most of you), the night before last, the power supply on my desktop PC went “Plooey.” 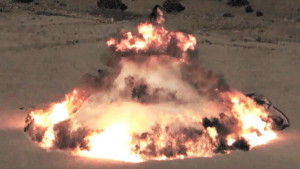 (Kinda like this, but with a lot less fire and smoke and a lot more “Plooey” and that electrical, ozone smell)

Yup, one moment, I’m playing a game, and the next, nothing. My computer, is now a boat anchor.

That almost prevented me from posting this week – better late than never, right?

Several things happened because of that technological kerfluffle.

The first is that I ended the day yesterday with a spiffy new laptop and I’m training my brain to type with an extended keyboard on the laptop.

The second reinforced something I said a long time ago: I need music like I need to breathe.

I powered on this spiffy new laptop and I ran through all the updates that were waiting for me, then I installed and updated anti-virus software. It was getting on towards noon, by that time and I wanted to get the blog post done. I logged into WordPress, got set to start typing and fired up the media player…

and it was empty.

I shit you not when I say that my brain shut off. Right after that, my next priority – even before installing games or any other damned thing – was figuring out how to connect my backup drive to this laptop so I could copy my music here. The satisfaction that I felt when I successfully transferred my music library to the new laptop, bordered on relief.

The third thing that I noticed while I was rebuilding my non-writing computing platform* was that I had become cluttered as hell.

This desktop PC was bloated with stuff that I set up and then never really used. At the time of the failure, I had *FOUR* web browsers installed, and had *Zero* intention to uninstall any of them.

That isn’t even the worst of it.

What I came to realize, was that maybe this failure was for the best. Maybe I needed to look at what I had been doing here and get rid of the dross. Might be that I was holding onto stuff that I wasn’t using, and didn’t need, but I couldn’t bring myself to get rid of until circumstances forced me to take a harder look at things.

I think that’s going to be a thing for me in 2018. There’s a lot of stuff that I can do without, that I’ve been tolerating in my life, and I think the time is coming when I start excising shit that doesn’t bring me happiness.

More on that later.

Music (so good to have it here on the new platform): Sabaton – Ghost Division

*I’ve got two computers. One that I write on and one that I do, practically everything else on. I don’t see combining the two into one machine as a huge technological hurdle. I am, however, self-aware enough to realize that if I had my games on the same laptop that I wrote on, my writing productivity would take a serious hit. I’ve got to keep the two separate for that reason.

This entry was posted in LIfe and tagged life. Bookmark the permalink.