Be Honest with Yourself

Welcome to Sunday everyone!

I hope you all had (and will continue to have) an awesome weekend.

Before I get into the meat of today’s post, let me show you something related to it: 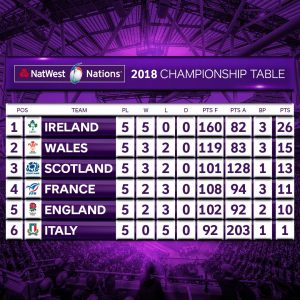 If you’re curious, you can watch the matches here*:

Scotland v. Italy (This one was *VERY* close)

Wales v. France (This, too, was a nail-biter)

Ireland v. England (Not so close, but England and Ireland at Twickenham is always a show)

Now you might be wondering how this relates to the topic of today’s post: Being Honest with One’s Self.

In answer, I would like you to take a look at the second, and third place finishers – particularly second place.

At the start of the tournament, ~Nobody~ saw that coming.  Certainly not Scotland who got absolutely overwhelmed by Wales in round one** and there’s something to take away from that, which I’ll get to later on.

Here’s my point: Wales – and I admit that I’m drifting into metaphor here – got up in the morning, put their heads down, and got to work. They did the one thing they had complete control over: the work. They didn’t listen to folk saying how good, or how poorly they were doing. They didn’t pay much attention to Ireland’s consecutive wins (Wales lost to Ireland in Round two, after that, there wasn’t much need to pay attention to what Ireland were doing). They took stock after every match. They didn’t fiddle with what was working, and they corrected what wasn’t working.

They were honest with themselves. And, while it didn’t happen overnight, look where it eventually got them: Runner up to the second best rugby team ON THE PLANET. That’s not nothing.

Let me talk about Scotland for a moment. They took an honest look at themselves after that first match, and they got to work too. They didn’t listen when folk said that they were done in the tournament already. There may have been self-doubt, but they got back up and, they too, did what they had absolute control over. The work.

Next week, Scotland beat France. The week after that, they beat England – which they hadn’t done in A DECADE.

If you’ve made it this far, you might be wondering what the hell this has to do with writing.

As I mentioned in Friday’s post, I hadn’t been honest with myself. I’d let in the thoughts that told me that I wasn’t doing enough. What I was doing wasn’t happening fast enough.

There was more, but you get the picture. On top of that I was struggling with a scene. Really struggling, and that just made it easier for those thoughts to take root.

That wasn’t me being honest. I was overlooking what I had done. Glossing over the effort. I had gotten up every morning to write. I had even gotten home late one day because I’d stopped to meet with my writer’s group and WRITE MORE.  AND I had figured out that scene.

I didn’t fiddle with what worked, and I corrected what didn’t. I was doing the work. The one thing that I had control over. I started being honest with myself again. Put my head down, do the work. It won’t happen overnight, but you’ll improve. There will be setbacks, but there is no setback so large, no defeat so complete that I can’t get back up and beat France next week***

It will take honesty and effort, and maybe it’ll take a decade of tries, but there’s always a chance if I keep working.

And, for those of you that think that writing and sports don’t mix:

First, let me say that writing and anything else that you’re passionate about, or enjoy, certainly do mix. They should mix. Take anything that recharges your batteries and use it.

Second, allow me to present to you this photo of J.K. Rowling hanging out with (left to right) Scotland players Greig Laidlaw, Stuart Hogg, and John Barclay. 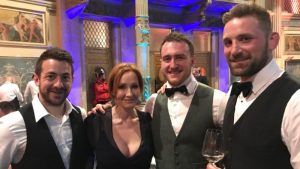 *For those of you that have lost 6 hours of your Sunday to Rugby..I regret nothing.

**I was glad for Wales, don’t get me wrong, but that loss stung, almost as much as the eventual loss to Ireland.

***absolutely have nothing against France, I just thought that line would be funny.

This entry was posted in LIfe, Rugby, Writing and tagged life, Rugby, writing. Bookmark the permalink.