The following is an excerpt from my short story, “Haven” which appears in The Weird Wild West anthology.

Wyatt Porter hit the nail off-center, bending it sideways, and burying it in the roof of his house. He muffled a curse.

“It’s daylight, son. There can’t be a shooting star.”

The note in his wife’s voice made him look in her direction. Sarah stepped off the porch and walked to where their son was playing with his puppy. Both of them stared into the sky.

Wyatt turned and looked up.

In the sky was a shooting star. Only it wasn’t like any shooting star he’d ever seen. It looked like a ball of fire–and it was getting bigger.

Wyatt scrambled down the ladder. There was no mistaking it. Whatever was in the sky was coming closer.

Sarah laid a hand on his shoulder. “What is it?”

Sarah turned. “Little Wyatt, you go on inside.”

“Yes, ma’am.” The boy picked up his puppy and trudged into the house.

Smoke was coming off the tail end of the fireball, and there was a sound, like thunder, growing in intensity. Wyatt couldn’t look away. The thought that it might crash down into his house flowed over him like a chill wind. Behind him, the horses in the barn snorted and stamped.

The sound of its passage grew to an ear-splitting roar, like the sky was being torn apart. It streaked across the sky, something dark at the center of the flames. He covered his ears, shaking his head as if he could clear the sound away. Windows shattered and his horses whinnied in fear, kicking against their stalls.

The fireball ripped through the sky, headed in the direction of town and crashed down beyond his sight. He heard a hollow boom and a smoky-orange cloud billowed into the sky.

Wyatt turned and ran into the house. Inside the door hung his gun belt and vest with his badge. He put them on.

Sarah met him on the porch. “I’m not going to try and stop you from going, Wyatt Porter, just you remember to come back to me.”

“I’ll be fine.” Wyatt kissed her, then leaped down the steps. “I’ll see you when I get back.”

“The hell you will. I’m headed to the Wheel. You’ll be wanting a drink later.”

Wyatt smiled, then ran to the barn.

Haven was in chaos.

Wyatt rode to the jail, townspeople battering him with questions from all sides as he hitched his horse. Jake McEvers, Wyatt’s deputy, stood on the porch trying to calm the crowd.

“Make way, folks.” Wyatt climbed the steps and turned to face the town.

“Everyone calm down. I saw the same thing you all did.” The crowd rumbled, but Wyatt raised his voice. “I don’t know what it was either, but I aim to find out.” He turned to Jake. “Saddle two horses.”

Jake nodded and disappeared into the jail.

Wyatt turned back to the crowd. “Whatever it was, looks like it hit ground around the Anderson Farm.” He scanned the crowd. “Doc, are you out there?”

“Here Wyatt.” A short, thin man threaded his way forward. Doctor Eliot Harper stood just a hair under five and a half feet tall which made him shorter than most of the folk in town.

Wyatt glanced in the direction of the farm. Thick, black smoke rose into the air.

Doc Harper lifted a brown leather bag. “Way ahead of you.”

Andy Turner, owner of the general store, said, “I’ll bring my wagon and as many buckets as I’ve got at the shop.”

Wyatt nodded. “Thank you, Andy. Volunteers, help load up and meet us at the Anderson place.” Jake returned with two horses. “The rest of you go on back home. We’ll get to the bottom of this.”

The crowd dispersed leaving Wyatt, Doc, and Jake alone in the street.

Wyatt’s eyes drifted to the rising smoke. “Did you see it?”

“I don’t think anyone in town missed it,” Doc said.

“What do you think it was?”

Doc crunched a piece of broken glass under his boot. “It was probably a rock from space. Broke into a thousand pieces when it hit.”

“Maybe.” Wyatt swung into the saddle. Doc and Jake got settled on their mounts.

Doc snorted. “You think we’ll find something else?”

Wyatt flicked the reins and they started towards the column of smoke rising steadily from the Anderson farm.

The smell of smoke filled Wyatt’s nostrils. Behind him, Doc and Jake rode in silence. When they got within sight of the Anderson farm, Wyatt stopped his horse.

The barn had been knocked down like a toothpick house. Burning splinters of it were everywhere. John Anderson and his eldest boy, Matthew battled the flames.

“Jake, take the men and put out that fire. Doc, come with me.” Wyatt kicked his horse into a gallop. At the house, he slid from the saddle and leaped onto to the porch.

“Sarah? Are you in there?” He opened the door.

Sarah Anderson ran into the room. Her face was covered in soot and streaked with tears. Two little girls trailed behind their mother. The smell of woodsmoke covered everything.

“Sheriff. Thank the good Lord. John and Matthew are–”

“I’ve got men helping them right now.” Wyatt stepped aside. “Doc’s here too. Are you or any of the little ones hurt?”

Doc slid past and into the room. “I’ll take care of things here, Wyatt. They’ll need you outside.”

Wyatt walked across the yard to join the others, then stopped, staring. Beyond the barn, a great furrow dug into the ground. It was twice as wide as a wagon and it went on until the end vanished in smoke. He walked to the edge of the furrow and looked down its length. At the far end, he guessed that it had to be deeper than his six foot height. Dirt had been thrown up and out for yards by the impact. He couldn’t believe that a single rock could do this much damage.

Through a break in the smoke, Wyatt saw…something at the far end of the furrow. Before he could think better of it, he hopped in and walked forward.

Crumbling earth walls on either side of him rose up past his head. The smoke was denser here and he stumbled over rocks and roots. Eventually the smoke thinned and Wyatt stopped, his mouth gone dry. The thing at the end of the furrow was no rock.

Wyatt had never seen anything like what lay partially buried in the earth in front of him. His mind struggled to categorize it, to put some kind of meaning to the object before him.

It was slick and streamlined. In places where the dirt had fallen away, gleaming metal showed.

What the hell is–

There was a loud hiss and a hatch opened in the side of the thing. Wyatt scrambled back as something long and sinuous pulled itself through the hatch and tumbled to the ground. It hit hard and lay still. Despite himself, Wyatt took a step forward, trying to get a better look.

The creature was covered in short russet fur broken by patches of blue skin. It staggered to its feet, leaning heavily against the metal. It was tall, taller than he was, with tiny ears, black eyes, and an elongated snout. It stood upright, thick legs flowing into an inhumanly long body. It reminded him of a weasel.

Wyatt fumbled his gun out and nearly dropped it. He pointed the shaking barrel at the creature. It shook it’s head, lost it’s balance, and dropped to one knee.

Wyatt lowered his gun. Whatever it was, it could barely stand on it’s own. It didn’t look like it was armed either.

The creature raised its head. It reached out a single, long fingered hand with three fingers that ended in short, sharp claws.

Wyatt felt a tingling in his head, then the creature uttered a single word.

Wyatt holstered his gun and ran forward. “Jake!” He reached the creature and stopped, uncertain. Lord, it was big. And it had a tail? Wyatt had no idea what he was looking at, but it had clearly asked for help and he wasn’t about to leave it lying in the dirt.

“Go get Doc,” Wyatt said. “Have Andy bring the wagon.”

Jake gaped at the creature.

“What are you standing around for? Go!”

Wyatt looked at Bill. “I could use your help down here.”

“What the hell is that thing, Wyatt?”

“I’ll help, Sheriff.” Jesse slid down the side of the furrow. Bill frowned at his son then, grumbling, slid down and joined them.

It took four of them to get the creature up and onto the wagon. There was solid muscle beneath the soft fur. Wyatt’s fingers brushed over the blue skin. It felt supple, like a snake’s.

“Wyatt,” Doc said as he approached. “John and Matthew have some burns that still need tending to. What’s so blasted–” He made a choking noise and Wyatt turned.

They covered the creature with a tarp and took it back to Haven. None of the men wanted to ride with it, and Andy didn’t even want to drive the cart. Exasperated, Wyatt gave Andy his horse and drove the cart back himself.

Townsfolk gathered as they rode into town. Jake and Doc waved them off, saying that the Anderson’s were fine. Wyatt didn’t slow, he wanted to get the creature into the jail before it woke up.

When they reached the jail, the three men half-dragged the creature inside and put it in a cell. Jake slapped a set of handcuffs on it and left the cell as quickly as he could.

Wyatt turned to Jake. “Keep anyone from coming in here until I give the word.”

Wyatt locked the cell door. He turned at the sound of his desk drawer sliding open. Doc bent over the side of the desk and came up with a bottle of whiskey. It rattled as he set it down.

Wyatt took the bottle from Doc’s shaking hand. “It might need your help.”

Doc looked at the creature. “Good God, Wyatt, what the hell is that thing?” He reached for the bottle.

Wyatt put the whiskey back in the drawer. “I don’t know. But it asked for help and I aim to make sure that it gets some.”

Doc’s eyes grew wide. “It spoke to you?”

“Yes, it spoke to me.” He’d never seen Doc this rattled before. “Now what do you think?”

Doc tried to compose himself and looked into the cell. “What do I think?” He turned back to Wyatt. “I think this is a creature from another planet. How can you be so calm about this?”

“Somebody has to be.”

“You didn’t see it, Doc.” Wyatt turned to cell. “It couldn’t even stand on it’s own. It looked right at me and asked for help. Then it collapsed.” He turned back. “Do you think you can do anything for it?”

“I haven’t the first idea how to treat it. I could very well do it more harm than good. I don’t even know what it is.”

“It is awake and can hear you.”

You can pick up a copy of this story and many others in The Weird Wild West anthology from: 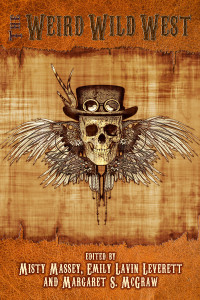