A few weekends ago… 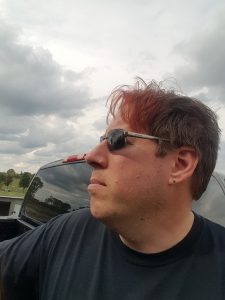 A couple of days go…

An author friend of mine posted on Facebook about having a few spare ARCs (Advance Reader Copies) and not knowing what to do with them. Another friend suggested a giveaway. Somewhere in the discussion, the idea came up that a short story contest set in the first Author’s world would determine who got the ARCs.

Nothing came of the contest idea, but, much to my surprise, I found that I was more interested in writing a short story set in this world than I was interested in getting the ARC.

I know, right? Books!!  What happened?

Somewhere along the way, I became more interested in seeing what I could do in this person’s amazing world than I was in getting an ARC of a book that I know I’ll pick up anyway.

It can either happen in an instant, or it can sneak up on you so quietly that you’re not aware that it’s taking place.

Right now, some of you might be asking, “Why is any of this significant?”

The wanting to write in someone else’s world rather than getting the ARC feels like I’ve somehow leveled up as a writer. Instead of an advance copy of a book that – like I said – I know I’ll pick up anyway, my writerly brain got all “Hell. Yeah. I want to write a story set there!! That would be awesome!!” Just the thought of playing in the sandbox of a writer that I enjoy reading was enough to get me going. That’s a first for me, and I hope that it won’t be the last…

And the dye job?

This was something that I had been talking myself out of doing for decades.

It seems kind of ridiculous, when you think about it.  It’s 2016. As a 46-year old man, I should be able to decide that I want to color my own, damn hair.

I was carrying around, maybe, 20-25 years of social baggage showing me that this wasn’t something that a guy did. I carried it around until something finally broke.  I couldn’t tell you what it was. It might have started back when I posted about forgetting. That line about “Everything I do is a choice.” has kind of stuck with me. I remind myself of that, practically daily.

So something broke.  When my stylist asked (not at all sounding bored) if I wanted my hair done “Like last time” I said “No. I want to add some color”.

With those seven words, I let go of decades of baggage that I had accepted and carried. It was pretty powerful (honestly, as the dye was being applied, my hands were shaking under that apron)  and I’m still wrapping my head around the implications of that idea of choice.

Right about here, I figure that I’ve just lost some of you.  Some of you may be thinking, “What the hell is the BFD? You dyed your hair.  Why am I reading about this?”

The point is that, in that instant, I stepped off into uncharted territory. It was significant, and totally different than anything that I’d ever done before in the same situation.

How does this tie into writing? In a couple of ways:

Your story has to flow in a way that makes sense. Your characters have to stay true to themselves. They can’t suddenly decide to do something that they wouldn’t have done given decades of opportunities.

You and I can do that, but they shouldn’t. Not without a very good reason and not without some kind of consequence – either internal or external or both.

Here’s another way this ties into writing:  I know that there are folks out there that struggle to write. They say that they would love to write, but they don’t have the time. If you’re one of those folks, and you’re reading this right now, come a little closer. I’m about to let you in on a secret.

In fact, I’m going to spill the beans on the whole thing. How to find time to write, how to get published. All of it.

Right now. Don’t even finish this post. You’re already at a device that has something that you can use to write on.

Choose to Write. It’s up to you. It always has been. At any time – as early as 4 sentences ago – you could be writing. There’s your time.

Choose to Write. Keep making that choice. You can make it at any time.  The change is instant – like flipping a switch. Even if it’s been decades for you, you can make that change at any time.

And it’ll be uncharted territory for you. It’ll be difficult, and frightening, and really hard, and wonderful and all you have to do is choose to do it.

What I’m working on:

The Price of Power: The second round of edits have been turned in and I’m waiting to hear back if there will be a third round or if the story is good to go. We’re getting close to the unofficial release date, so stay tuned…

Brimstone: Submitted before the deadline.  The outside date that I’ll hear whether or not the story has been accepted is Oct 31st.

Partners: Still in the final edit/polishing phase.  Need to cut a final 200-words-and-some-change to get down to the 6000 word upper limit.  This one is Due on the 15th.  I want to have it ready to go by the 10th.

Chasing the Kestrel: I’ve got to follow up with an agency (They’ve probably decided to pass on it, but the agency website did say to follow up if I hadn’t heard any response). I’ve still got several open queries – including the agent who asked for more pages.

I’m trying to decide whether I want to submit a story for either the “Submerged” or “Death of All Things” anthologies that Zombies Need Brains successfully Kickstarted. Deadline for that is Dec 31st. That gives me 2 months to write, edit, and submit a story…Or, maybe I’ll push myself a little and try and knock out one for each.

2017: I’m formulating plans and schedules (more on that later) but I want to keep the momentum that I’ve generated this year going.

New Website: I should, actually call it an additional website. My writers group is getting ready to launch a new website where I’ll be a regular contributor. Stay tuned for Linkage…

I’m adding something new, and probably purely for myself, here.  If you’re a writer, you’ve either heard this before – or you’re about to hear it for the first time, now. Before you start writing *really* well, you will have to write a million…um…not so well…words.

Recently, the idea to keep track of that first million and to post it somewhere came up and I thought it was a good idea, if only to provide a kick in the ass.

Up front, I will confess that this is going to be a ballpark number for the following reasons:

And here it is – thanks to the magic of Calculators and Coffee – my total word count:

Out of my first million words, I have written:

I confess to feeling a little daunted by that number. I hadn’t actually done the calculations until just before I typed that. But, you know what?